Virtual Reality – The beauty of vision technology with the accuracy and repeatability of Renishaw encoders.

Power Plus offers high precision camera positioning for virtual reality technology in the broadcasting industry, with the help of Renishaw’s optical and magnetic encoders to support accuracy and repeatability.

Virtual reality (VR) is a term that applies to computer-simulated ‘virtual’ environments that can simulate physical presence in places in the real or imagined worlds. It was initially designed for professionals to conduct training in a virtual environment - such as a flight simulator ...

Virtual reality (VR) is a term that applies to computer-simulated ‘virtual’ environments that can simulate physical presence in places in the real or imagined worlds. It was initially designed for professionals to conduct training in a virtual environment - such as a flight simulator for pilot training where learners can improve upon their skills without the risk of failing the operation.

VR technology relies heavily on camera positional data for perfect synchronization between virtual and physical elements in real-time broadcasting – which is why camera support equipment, manufactured by Hong Kong based Power Plus, depends on the accuracy and repeatability provided by Renishaw encoders.

Power Plus is a subsidiary of Digital Precision Systems Ltd. (DPS), which in China is the sole authorised dealer and service partner of Vinten, a global leader in broadcast camera support equipment, and a key supplier to well known TV broadcasting organisations including CCTV and SONY.

On 16 June 2012, DPS opened a new chapter in its history and collaborated with leading virtual graphic system providers VIZRT and ORAD for a CCTV full virtual live broadcast of the ‘Shenzhou-9’ spacecraft launch at the Jiuquan Satellite Launch Centre, in China, supplying Power Plus’ own virtual jib systems and supports.

Charles Wong, the director of Power Plus, says, “On the one hand we deliver Vinten products combined with camera support solutions to customers; on the other, we develop new complementary products for niche sectors.”

Mr Wong explains the workflow in VR: “The use of a pan-tilt head allows stable and precise movement of the camera in the live broadcast, while our graphic enhancement production system acquires camera positional data via the Renishaw encoded pan-tilt head and Vinten’s VR interface box. The virtual studio system then renders and generates virtual live feeds by compiling and editing the real-time streaming video data and the virtual tracking data (camera position), followed by tuning and distribution prior to broadcast.”

Seamless integration of VR calls for highly repeatable camera positioning. Power Plus’ high precision pan-tilt head and jib employ Renishaw’s RESR incremental rotary (angle) encoder system on both the pan and tilt axes, with the RGH40 series non-contact optical read-head offering repeatability to 0.004 arc seconds. Available with a wide diameter range and compatible with a series of read-heads, the RESR incremental rotary encoder is designed with low mass and low inertia to ensure great dynamic performance. Backlash and other mechanical effects, created by coupling or bearings, are eliminated by the direct mount mechanism.

Mr Wong says: “Compared with the use of traditional enclosed-encoders; the non-contact encoder has excellent repeatability and with zero backlash, which is critical for VR performance. We are very satisfied with Renishaw’s encoders which are built for precision.” Power Plus employed Renishaw encoders after first seeing their success in Vinten products, but has discovered additional benefits: “We compared encoders from different suppliers but we find Renishaw’s to be the most stable and repeatable. We can see why Vinten has had a long and successful partnership with Renishaw,” Mr Wong observes.

Simple and fast installation is another trademark of Renishaw encoders. Every read-head features wide installation tolerances and an integral set-up LED, which allows easy installation and removes the need for complex set-up equipment. Renishaw’s RESR encoder ring features a patented taper mount which corrects for rotor eccentricity. This simplifies the integration and minimizes installation error. Mr Wong continues: “Installation of the encoder ring could be a headache. However, Renishaw’s taper mount design considerably reduces our engineers’ workloads and allows us to easily know whether the installation has been successful - just by reading the set-up LED.”

The set-up LED also gives users a quick way of performing diagnostics, Mr Wong explains: “Once, I remember that the read-head was accidently disturbed from its position, due to careless transportation, just before the live show was due to start. However, we were able to rectify the system quickly and catch up on the show. This gives us the confidence to cope with any similar issues that arise in the future.” The encoders used in the pan-tilt head must match the standard resolution of TV broadcasting. Renishaw’s RESR incremental encoder ring offers an angular resolution to 43.2M counts per revolution (CPR), satisfying the most demanding requirements in today’s broadcasting industry.

Mr Wong adds: “The resolution of TV broadcasts is expected to increase sequentially in the future. Some manufacturers have already launched their new 4K TV models which offer resolutions 4 times higher than the current high-definition TV (HDTV). We don’t know when it will become standard but we have to upgrade the encoder resolution. Renishaw offers a wide range of encoders covering the most demanding specifications, providing us with flexibility for upgrades in the future.”

Power Plus’ current pan-tilt head models offer resolutions to 1.6M CPR which is sufficient for today’s broadcast standard and even 4K TV- when upgraded. Power Plus has also developed motorised devices, for controlling the focus and zoom rings on the camera head, which utilise magnetic encoders supplied by RLS, an associate company of Renishaw from Slovenia. The RLS RE22 series rotary magnetic encoder is designed to be compact and offers resolutions of 13-bits for high speed operation to 20,000 RPM.

Mr Wong says: “The device consists of two individual gear modules coupled to the focus and zoom rings on the camera, each module is equipped with the RE22 encoder system to transfer positional data to the virtual studio system during zooming and focusing. The RE 22 offers a simple integration with our existing camera head models but more important is its cost-effective performance and the confidence delivered.” He concludes: “Thanks go to Renishaw. They always provide the best support and an excellent delivery service. Presently, we have some new projects which involve TONiCTM and RESOLUTETM absolute encoders. With Renishaw’s support, we are confident about developing more innovative and successful products for the broadcasting industry in the future.” 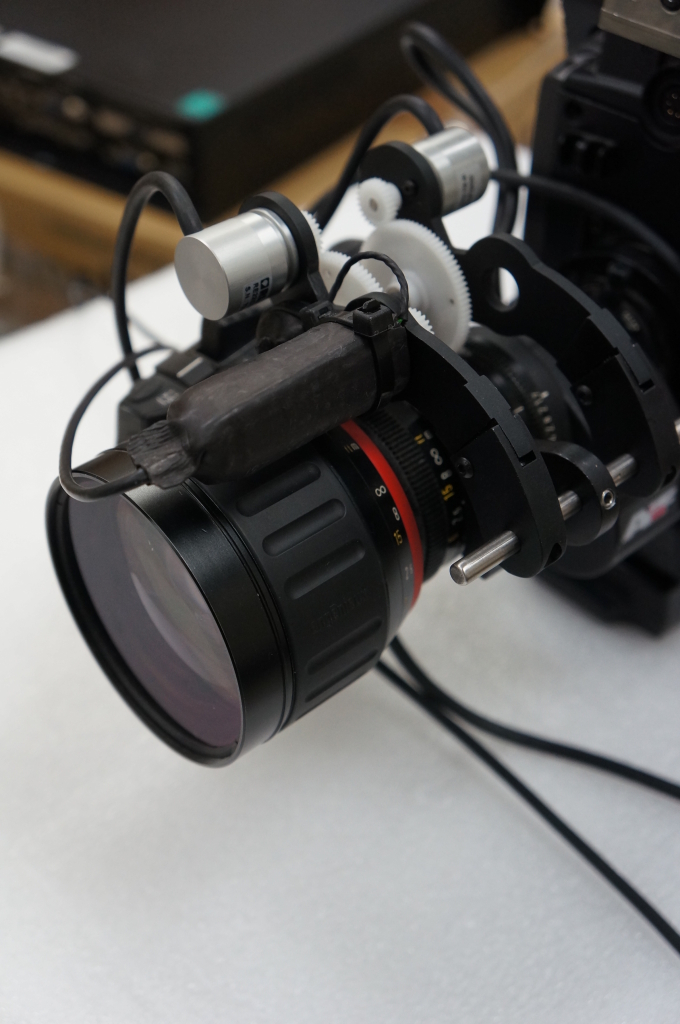