“Manufacturing technology orders will be good but smaller than 2018, and we will see a significant move in the
customer mix as large manufacturers shift capital liabilities down the supply chain or into the machine shop sector,” said Pat McGibbon, Chief Knowledge Officer for AMT. “In the past four months, the share of total orders placed by machine shops increased more than 20 percent. This is typical of business cycles with disruptions rather than a decline in manufacturing activity.”

While orders were up overall in May, growth was not even amongst all industries. Construction machinery manufacturing was up nearly seven-fold over the previous month, and orders from agricultural equipment manufacturing more than doubled. On the other hand, orders from the medical equipment manufacturers fell by a third, and primary metal manufacturing slashed orders by more than half. Orders from the aerospace sector increased just under 10 percent, and the engine and turbine sector, as well as automotive orders, increased by a third and a quarter, respectively. Machine shop orders fell by less than one percent. Of the major USMTO industries, industrial machinery had the highest uptick in orders, more than doubling April 2019 levels.

The largest growth rate for a region in May 2019 was the Southeast, where orders increased 25.8 percent of their April 2019 level. Gains were also seen in the West, North Central – East, and South Central regions. Modest losses were recorded in the Northeast and North Central – West regions, where monthly totals fell by single-digit percentages from April 2019.

June 2019 ISM Manufacturing Report On Business reported the Purchasing Managers’ Index at 51.7, a modest decline but still signaling an expansion in manufacturing activity. Capacity utilization increased in May by nearly a tenth of a percentage point to 76.18, the first increase of 2019. The University of Michigan consumer confidence index fell in June to 98.2 percent, down 1.8 percentage points as anticipated. Despite the slip in confidence, the university notes the overall decline was driven by households in the top third of the income distribution citing negative impacts of tariffs. 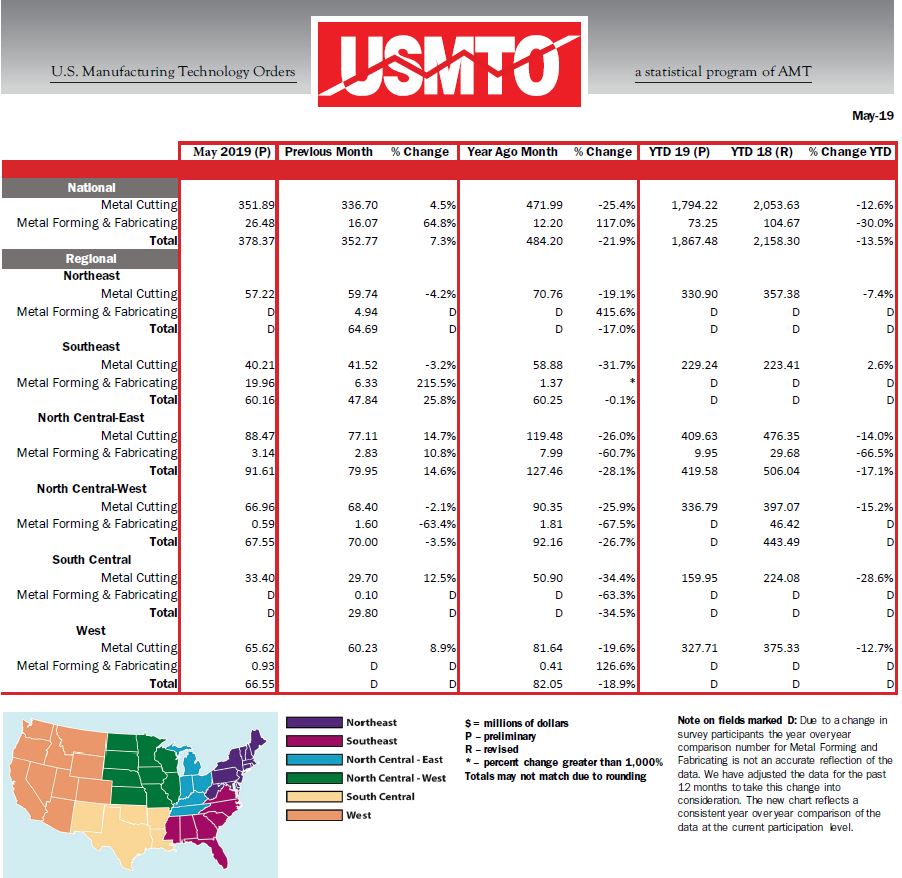