A powerful standard industrial robot at a very reasonable price – with this seemingly simple business idea, German technology startup fruitcore GmbH has been making things happen on the robotics market since 2017. This extraordinary price/performance ratio is made possible by means of intelligent technical details. This also includes the new kind of drive concept of the robot, which combines four-bar linkages and planetary gearboxes from Neugart.

Constance-based fruitcore GmbH specializes in the development, manufacture and marketing of technically advanced and easy to operate industrial robots. The focus is on having a self-developed system, which makes it easy for companies of any size to gain a foothold in the automation area. Established in 2017, the fledgling company now has more than 40 employees, including highly specialized experts in construction, electronics and software development.

The modular portfolio does not only include the intuitively operated software horstFX, suitable accessories such as grippers and a mobile robot basis, but also the newly developed articulated robot HORST (the name stands for Highly Optimized Robotic Systems Technology). The 6-axis robot with a reach of 900 mm, a payload of 3 kg and repeat accuracy of +/- 0.05 mm is based on a new type of drive concept with four-bar linkages, which is completely new in the field of robotics. By dispensing with the cost-intensive shaft or cycloid gearboxes that are normally used, HORST provides an optimum ratio between range and payload at a comparatively low cost. 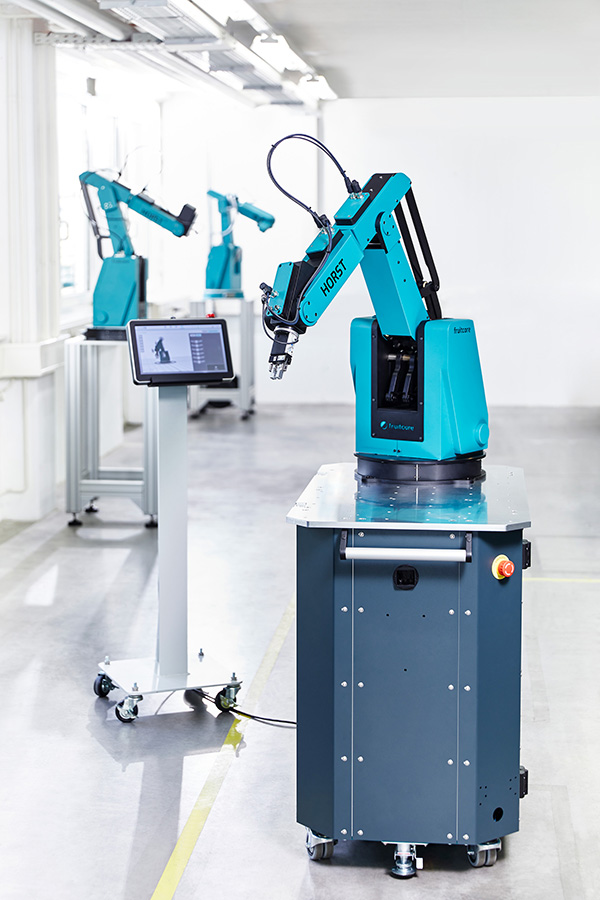 The HORST industrial robot developed by fruitcore has an excellent price/performance ratio. The prerequisite for this is the combination of four-bar linkages and planetary gearboxes, which has never been used before in robotics.

Gearbox as central component Four-bar linkages have a non-linear and therefore position-dependent transmission ratio. Manuel Frey, co-founder and development manager of fruitcore, explains exactly what this means with regard to a robot arm: "because of the high transmis...

Four-bar linkages have a non-linear and therefore position-dependent transmission ratio. Manuel Frey, co-founder and development manager of fruitcore, explains exactly what this means with regard to a robot arm: "because of the high transmission ratio of the four-bar linkage when the arm is extended, the torque peak which would be applied to accelerate this extended arm including the load is significantly less than with conventional robots."

The advantage of this is that smaller motors can be used, which reduces the price of the robot. However, there is also a disadvantage which was discovered during the course of the development work: the ratio of the four-bar linkage alone is insufficient. For this reason, additional gearboxes are used on the axes as the solution. This combination is what makes HORST unique.

Single-stage planetary gearboxes proved to be the optimum gearbox type for this special application. In order to ensure that the optimum payload and range are achieved with the highly dynamic robot movements, the entire drivetrain must be efficiently designed. The correct transmission ratio acts as a basis for this, and is largely determined by the planetary gearbox. "Without the four-bar linkages, in theory we would have had to use two-stage gearboxes, which have significantly higher torsional backlash and would therefore be unsuitable for use in articulated robots", says Manuel Frey, describing the less practicable alternative. 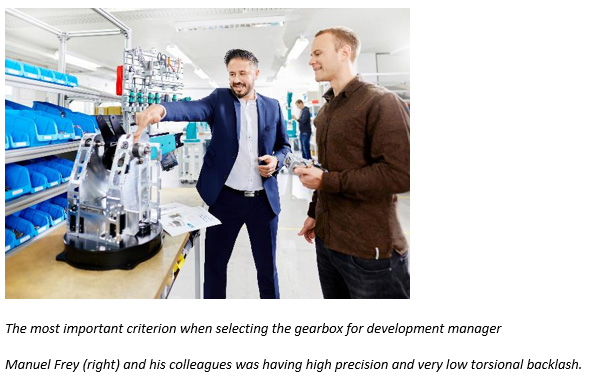 A suitable manufacturer was not easy to find for the people in charge at fruitcore, as Manuel Frey recalls: "It took us a long time to find a suitable provider of planetary gearboxes that were exactly right for our system or can be adapted accordingly – and we also wanted them to be manufactured in Germany." Against this background, the company chose gearbox specialist Neugart from Kippenheim, in Baden-Württemberg.

The most important criterion when selecting the gearbox for development manager Manuel Frey and his colleagues was having gearboxes with high precision and very low torsional backlash. Neugart gearboxes provided the required torsional stiffness in the standard version of the Economy line. This was completely sufficient in this specific case, since the gearboxes installed in HORST are purposely only operated within the usual nominal range. Even application cases with high radial loads, such as when belts are being used, can be covered by the outstanding performance of the Neugart products with standard gearboxes. This means that not only can less expensive components be used, but the endurance strength of the gearboxes and a long robot service life are also ensured by operating within the nominal range.

PLE gearboxes of different sizes are used on three of the six robot axes, and the PLN090-008 model on a fourth axis (axis 1). The economy planetary gearboxes in the PLE series are extremely light, extremely powerful and also suitable for demanding, dynamic load cycles due to their low-friction bearing concept and optimized lubrication.

As well as the product characteristics, the problem-free collaboration also spoke in favor of Neugart: "The implementation of the gearboxes was absolutely problem-free", confirms Manuel Frey. "Neugart always reacted to our adaptation requests quickly during the development phase. The data and information provided by Neugart in the catalogue and the TDF and NCP configuration tools right from the start were also very useful, and so comprehensive that we were able to start immediately. Of course, occasionally there were technical issues, but these were always quickly and easily cleared up with close reciprocal coordination." 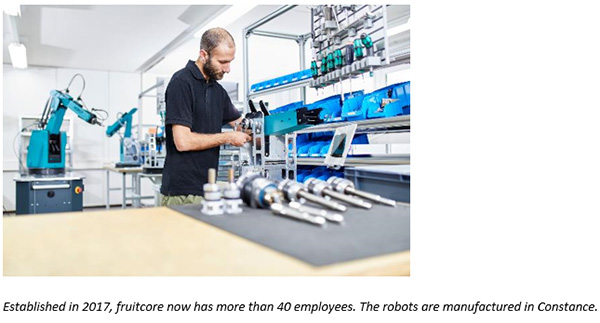 The HORST industrial robot developed by fruitcore has an excellent price/performance ratio. The prerequisite for this is the combination of four-bar linkage and planetary gearboxes, which has never been used before in robotics.

On the one hand, the quality of the PLE and PLN gearboxes manufactured in Germany supports Neugart as a supplier. On the other hand, the manufacturer is already prepared for future requirements with its extensive portfolio: "Other robot sizes are in the pipeline", says Manuel Frey, looking towards the future. "Because of the wide range of gearbox models that are available, nothing stands in the way of this plan – and the continuation of our successful collaboration with Neugart". 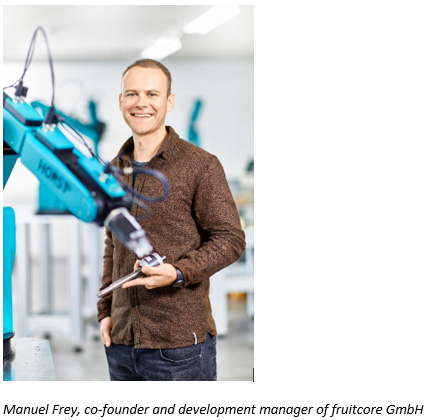