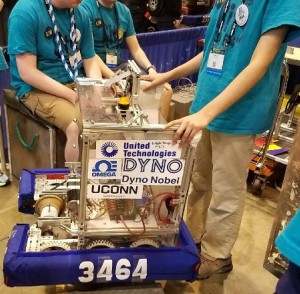 OMEGA Engineering-sponsored Sim-City robotics team from Simsbury High School who ranked 19 out of the 68 teams in their division at the 4-day FIRST Robotics National Championship in St. Louis, Missouri from April 26 through April 29.

FIRST (For Inspiration and Recognition of Science and Technology) runs the largest and oldest student robotics competition in the world. 30,000 students from 39 countries competed this year, with 2,400 volunteers helping 1,394 teams show off their robots to more than 65,000 attendees.

“Sim-City finished 19th out of 68 teams in their division after losing in the semifinals because their Alliance Captain robot suffered a drivetrain malfunction, forcing them to rely on a substitute alliance partner they hadn’t worked with before,” said Mike Bonchick, a consultant for OMEGA whose son was on the Sim-City robotics team.

FIRST teams are high school students that compete under strict rules, limited resources, and an intense six-week time limit, where teams are challenged to work together to raise funds, and build and program industrial-size robots to play a difficult field game against like-minded competitors.

Student teams work with STEM professionals to coach them through the build and competition. Millions of dollars of scholarships are also available to participating students.

Dean Kamen, president of DEKA Research & Development Corporation, founded FIRST in 1989. He wanted to inspire students to practice using science, technology, engineering, and math in real-life competition situations that can prepare them for future careers and leadership opportunities.

“Everyone at OMEGA is extremely proud of the Sim-City Robotics Team, and we look forward to future competitions together,” said Bonchick.

FIRST sponsors like OMEGA Engineering help support the next generation of STEM leaders and innovators.