From a distance, the typical observer may have little appreciation for the complexity that comprises a modern wind turbine blade. Such blades can be more than 100 meters long, with dozens of separate layers of advanced composite materials. Increased complexity, however, does not come without its challenges. For instance, representing these blades in a computer model would require billions of degrees of freedom to accurately capture all the engineering properties, overwhelming available computing resources.

Realizing similar challenges in the aerospace industry 30 years ago, the US Army began funding development of a software technology called VABS to model composite helicopter rotor blades. The software matured over time to compute all the properties of composite rotor blades efficiently and accurately by modeling the very complex blades using simple engineering beam theories. Using VABS, engineers gained the ability to confidently evaluate the performance of existing composite blades, as well as design blades for desired behavior, naturally setting the stage to move beyond aerospace to tackle problems in other industries, including renewable energy.

NREL’s focus is on creative answers to today's energy challenges. Equipped with AnalySwift’s VABS software in its workflow, NREL research will be supported with accurate modeling of the engineering properties of even the most complex wind turbine blades. Use of VABS within NREL is currently supported by two projects, namely, the Atmosphere to Electron High-fidelity Modeling (HFM) project, as well as the Big Adaptive Rotor (BAR) project. 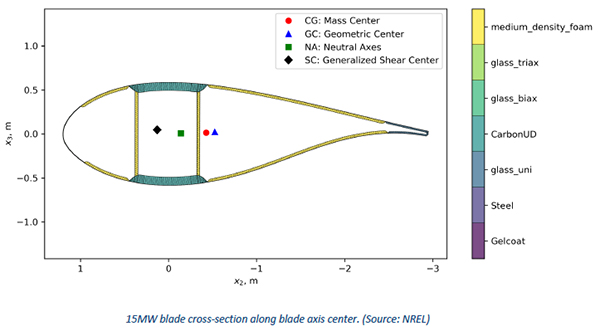 NREL’s HFM project aims to use high-performance computing to understand and accurately model fundamental physics on appropriate temporal and spatial scales to predict complex, rapidly changing inflow to the wind plant, complex flow within a wind plant, and the response of individual turbines and the wind plant as a whole to the flows.

The BAR project’s goal is to maximize the advantages of large-scale rotors and their potential for increased energy generation through innovative design of highly flexible blades. 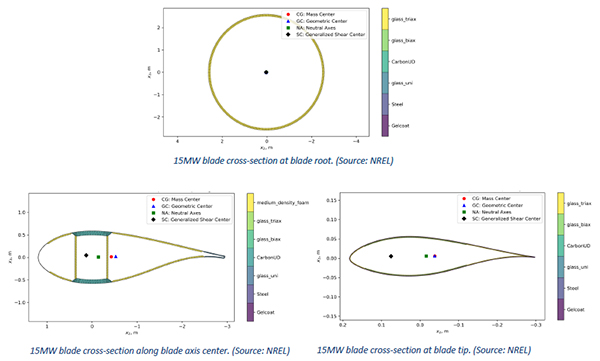 The VABS software program has helped researchers at NREL generate cross-sectional stiffness and mass properties for modern wind-turbine blades with pre-bend and twist designed and used in the aforementioned projects. The properties computed via VABS are used as inputs by BeamDyn, a nonlinear finite-element beam model based on the geometrically exact beam theory (GEBT). BeamDyn is NREL’s blade modeling tool of choice for turbine simulations coupled with high-fidelity computational fluid dynamics.

Recent efforts at NREL have focused on validation of BeamDyn for long, flexible blades (both curved and straight) with bend-twist coupling by comparing quantities of interest such as blade displacement and rotations against resolved nonlinear shell finite-element models.

According to NREL, one of the use cases considered for validation is that of the 15-megawatt offshore reference wind turbine design. Based on the composite layup definition of the blade, researchers at NREL used VABS to compute the blade beam stiffness and mass properties for cross sections along the blade axis. 15MW blade cross-section at blade root. (Source: NREL)