Robert Riener, the initiator of the Cybathlon, shares his thoughts on how technology can be used to address sensitive issues.

Robert Riener is the initiator of the Cybathlon. He shares his thoughts on how we can use technology to address sensitive issues.

How can we arouse interest in this subject and capture peoples imagination? With robotics and cool technology. This is how we get people better acquainted with the subject of disability in an entertaining but dignified way. But we can be under no illusion: you need a lot of events like this and plenty of patience until you achieve a visible effect in society as regards including people with disabilities.

However, one of the early successes of the Cybathlon is certainly the increased exchange between users and developers of assistance systems. All the teams involve the pilots and medical practitioners in the development phase. Of course, the focus is at first on developing high tech, and the researchers try out a lot of things in the competition. But the wishes and needs of people with disabilities are taken into account. As a result, the technology is developed quicker, and in a more targeted way. After all, the systems have to be useful in people’s everyday lives. And we also shouldn’t forget that the craziest technology could well be established and affordable in twenty years’ time.

Incidentally, large prosthesis manufacturers have launched products earlier as a result of the experience that they gathered at the Cybathlon. And new start-ups have appeared, which are now selling stair-climbing wheelchairs. We have also brought on board various organizations for people with disabilities to provide us with specialist advice. 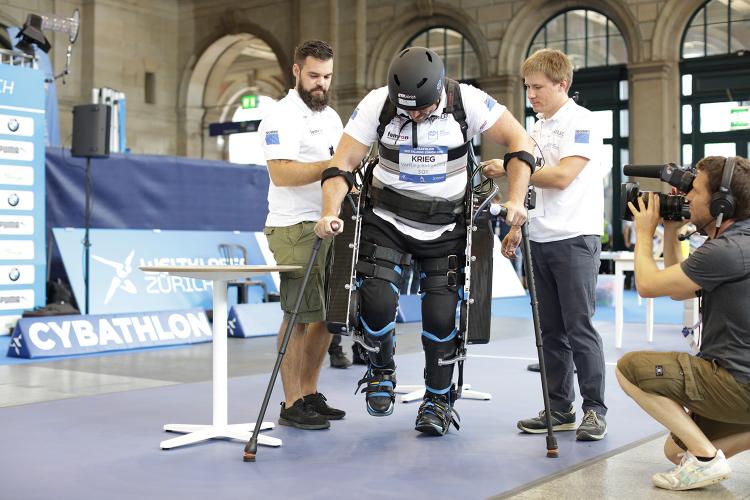 What we need even more is for people with and without disabilities to communicate with each other. People with disabilities are only disabled if they come up against the insurmountable. There are not only physical barriers to overcome, such as when traveling by train or going shopping. Barriers i...

What we need even more is for people with and without disabilities to communicate with each other. People with disabilities are only disabled if they come up against the insurmountable. There are not only physical barriers to overcome, such as when traveling by train or going shopping. Barriers in people’s minds result in people with disabilities often being overlooked or even ignored in the public sphere. We must increase acceptance of diversity, in general. Too many people still take the attitude that a disability should be regarded as an illness. And we all have our limitations in some areas – in my case it’s ball sports, for example. But seriously: everybody has different strengths and weaknesses and that’s fine. I hope that one day, it will no longer be an issue whether somebody has a disability or not, because there will no longer be any barriers – neither in our surroundings nor in our heads.

CYBATHLON
In the Cybathlon, people with physical disabilities compete against each other in obstacle races – supported by state-of-the-art technical assistance systems. The teams and their pilots compete in six disciplines: brain-computer interface (BCI) race, functional electrical stimulation (FES) bike race, powered arm prosthesis race, powered leg prosthesis race, powered exoskeleton race, and powered wheelchair race. The Cybathlon is hosted by the Swiss Federal Institute of Technology in Zurich (ETH). With this event, the institute provides a platform for exchange between technology developers, people with disabilities, and the public.