With the decreasing cost of 3D printers and additive manufacturing in general, the automotive industry is making use of it in all sorts of car parts. In the past few years, we’ve seen the biggest names in the industry, from Audi to Ford, take on technologies from Carbon, Stratasys and a host of other companies. The usages have ranged from short one-offs to large-scale production. However, fully 3D printed automobiles have been far rarer, which is why Divergent’s Blade supercar is such a game-changer.

This 700-horse powered, street-legal design houses a Mitsubishi Evo 4-wheel drive engine in a futuristic frame composed of a mixture of aluminum, titanium, and carbon fiber. Blade gained quite a bit of notoriety for being the world’s first fully 3D printed supercar, even going so far as to ...

This 700-horse powered, street-legal design houses a Mitsubishi Evo 4-wheel drive engine in a futuristic frame composed of a mixture of aluminum, titanium, and carbon fiber. Blade gained quite a bit of notoriety for being the world’s first fully 3D printed supercar, even going so far as to be featured by celebrity and renowned auto-enthusiast Jay Leno. 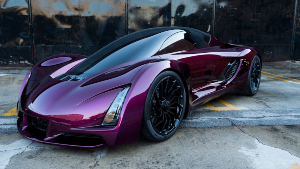 The car is completely street legal and it can achieve a 0-60 mile-per-hour (96 kilometers per hour) sprint of just 2.5 seconds, using either gasoline or compressed natural gas as possible fuel sources. It even brings in influences the aviation industry with its central seating position-based interior design. It’s a marvel of modern automotive manufacturing and it owes a lot of that to the unique advantages that 3D printing brings to the table.

Divergent 3D designed the car to be a showcase of the possibilities that 3D printing has to offer. As a result, they created an intricate design that took advantage of how light 3D printed parts can be. It measures an astoundingly nimble 1,388 pounds (629 kilograms), making it about 90 percent lighter than most traditional supercars.

Even aside from the incredible weight to power ratio, the use of various printed components allows the company to streamline their entire production process allowing for better cost-efficiency, space-usage and production times. For example, by 3D printing the nodes, Divergent says that it can drastically cut down the time it takes for the production of the entire chasis, all in a micro-factory environment. On top of that, the chasis weighs a meager 102 lb (46 kg), composed of fiber tubing with aluminum joints. Divergent even insists that this same node-based system could also be applied to build a pick-up truck that drives like a sports coupe.

Divergent 3D weren’t just making a 3D printed car for its own sake. They had a nobler purpose in mind behind their choice of production methods, as well. It comes down to the pollution-heavy, environmentally unfriendly mode of vehicle manufacturing that remains the industry standard the world over.

"A far greater percentage of a car's total emissions come from the materials and energy required to manufacture it," explained Kevin Czinger during a keynote speech the O'Reilly Solid Conference in 2015. "How we make cars is actually a much bigger problem than how we fuel our cars."

While many companies have been looking to push cars that are far less heavy on emissions or are hybridized, Divergent has been looking into the whole production process and retooling it for a greener mode of manufacturing. This also has the advantage that, instead of pushing the onus on the consumer, they are taking up the responsibility from the supply side and looking to provide a cleaner means of running the business. Similar initiatives could severely improve the state of how much companies are contributing to emissions and plastic consumption.

Aside from building the Blade themselves, Divergent is looking to dematerialize and democratize the industry, giving its 3D printed build technology and expertise directly in the hands of small start-ups. As a result, those smaller companies avoid many of the expensive barriers to entry that the auto manufacturing incurs. Additionally, they can innovate new vehicles out of microfactories of their own, using these more efficient processes.

Divergent 3D received backing from Hong Kong billionaire li ka-shing and raised $65 million USD in 2017 based on this new process they were touting. Of course, the main attraction is the speed with which they can assemble car parts, boasting a production speed of mere minutes. On top of this, due to the use of additive manufacturing and a controlled precise work process, they also reduce the need for manual labor, rather relying on small teams of skilled workers.

The Blade presents a different means of not just putting a car together, but also of arranging the entire automobile industry. Divergent have ambitious goals in upending the traditions of one of the largest industries in the world with new technologies and processes but they might be on to something. Perhaps it won’t be that long before you too can drive a fully 3D printed car.