Nichicon (America) Corporation, the industry leader in aluminum capacitors, has done it again with an audio design kit that’s a must-have for audio engineers and enthusiats. The Audio Series Kit, sold exclusively for Nichicon by Mouser Electronics, contains the best from Nichicon’s audio capacitor lineup. With 14 specific audio cap series, it’s the widest offering of its kind within the capacitor industry—ensuring warm tones and rich sounds for even the most complex of devices.

“Because of the depth of the Nichicon products offered specifically for the audio industry no one else is able to offer the type of value found in our audio design kit distributed exclusively by Mouser Electronics,” explained Mark Fisk, Nichicon’s GM of marketing.

Nichicon’s Audio Series Kit was designed with tech movers-and-shakers in mind. It’s a comprehensive blend of all-purpose and specialized audio capacitors, making it a one-stop shop for a variety of applications. From auto to gaming to home entertainment, the supplier with superior cap know-how has drawn on its state-of-the-art technology to satisfy even the most particular designers.

Much of the Audio Series Kit’s diversity is also due to the sheer quantity of capacitors included. Each kit contains with not one, but five of each of Nichicon’s audio capacitors (aside from their snap-in capacitors), amounting to a 335-piece design kit. 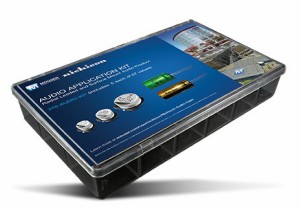 With this tailor-made offering of audio capacitors, Nichicon remains ahead of the electronic component game—delivering high-quality, high-efficient products, time after time.

Nichicon is a world leader in the production of electronic products, including, aluminum electrolytic capacitors, conductive polymer capacitors, electric double layer (EDLC) and film capacitors as well as power supplies, and thermistors. Nichicon America is headquartered in Schaumburg; IL. Nichicon Corporation is headquartered in Kyoto, Japan and has numerous manufacturing facilities in Japan, China, and Southeast Asia.