The implementation of new technologies into existing operations can create a paradoxical situation for organizations reliant upon efficient operations.

For the National Research Council of Canada (NRC), this paradox is of particular concern when attempting to integrate new vehicle propulsion technologies in the transit industry. With concerns for carbon emissions becoming a critical issue, it is increasingly important to transport more commuters with public transit while simultaneously decreasing the environmental impact of transit operations. With an initial focus on the electrification of public transit, the NRC tasked Maplesoft with developing a comprehensive, physics-based model of a battery-electric bus to build upon their existing capabilities.  The NRC now has an improved, highly configurable model that can better simulate the integration of battery-electric buses into ongoing operations.  The model plays a central role in the Fleet Forward Methodology; a methodology developed and used by the NRC to de-risk the deployment of battery-electric buses across Canadian municipalities. By leveraging Maplesoft’s expertise, the NRC team was able to produce a highly sophisticated model using leading edge technology that will help inform operators, equipment manufacturers and regulators, while at the same time improve public transit as a whole.

As cities across the world continue to increase in both population and density, public transportation plays a critical role in creating liveable cities by reducing the total number of vehicles operating in urban centers. An effective transit system also has the potential to drastically reduce carbon emissions generated from the transportation of people, resulting in improved urban air quality and sustaining a healthy environment for generations to come.

In order to realize the potential environmental and societal benefits of improved transit, the National Research Council of Canada (NRC) is determining how to optimize existing transit operations through the implementation of new technologies. Part of their existing research focuses on the analysis of fleet operations using model-driven approaches to transit technology planning. By using physics-based modeling as the core of their analysis methodology, the NRC is able to provide more accurate forecasts of the system-level implications of technology implementations. To improve the flexibility and configurability of their existing modeling tools, the NRC looked to migrate their modeling platform to the modeling and simulations tools developed by Maplesoft.

As an initial step towards capability migration, the NRC’s modeling team worked with Maplesoft’s Engineering Solutions team to create a high-fidelity model of the battery-electric bus dynamics, taking into consideration a wide variety of factors that impact operational decisions. These factors are all necessary to address a range of concerns from transit operators when moving forward with a new type of transit system. For example, transit operators need to know the uptime for an electric bus in comparison to a diesel-powered bus to plan schedules and streamline operations.  This requires a detailed understanding of both the charging of bus batteries and determining realistic energy consumption as the bus completes a specific transit route. The operators are also interested in other operating considerations of battery-electric buses such as carbon emission savings, equivalent diesel fuel savings, and the cost of charging the bus during typical usage. The system-level model developed by NRC and Maplesoft helps provide information to address these questions early in the vehicle procurement process.

The battery-electric bus model is composed of a variety of subsystems that are integrated into one unified system for simulation and design exploration. This model was created using MapleSim, Maplesoft’s tool for system-level modeling and simulation. The model incorporates interactions from multiple domains of the electric bus system, such as the vehicle body dynamics, electric motor performance, detailed battery models, and passenger loading details as the bus model travels a specific route (Figure 1). This model was created using both the standard MapleSim physics-based components and customized components, which provided the ability to modify the design to the exact bus and transit specifications. With the completed model, the NRC is able to simulate the entire vehicle system, providing system performance information at any point that the engineer wishes to examine. 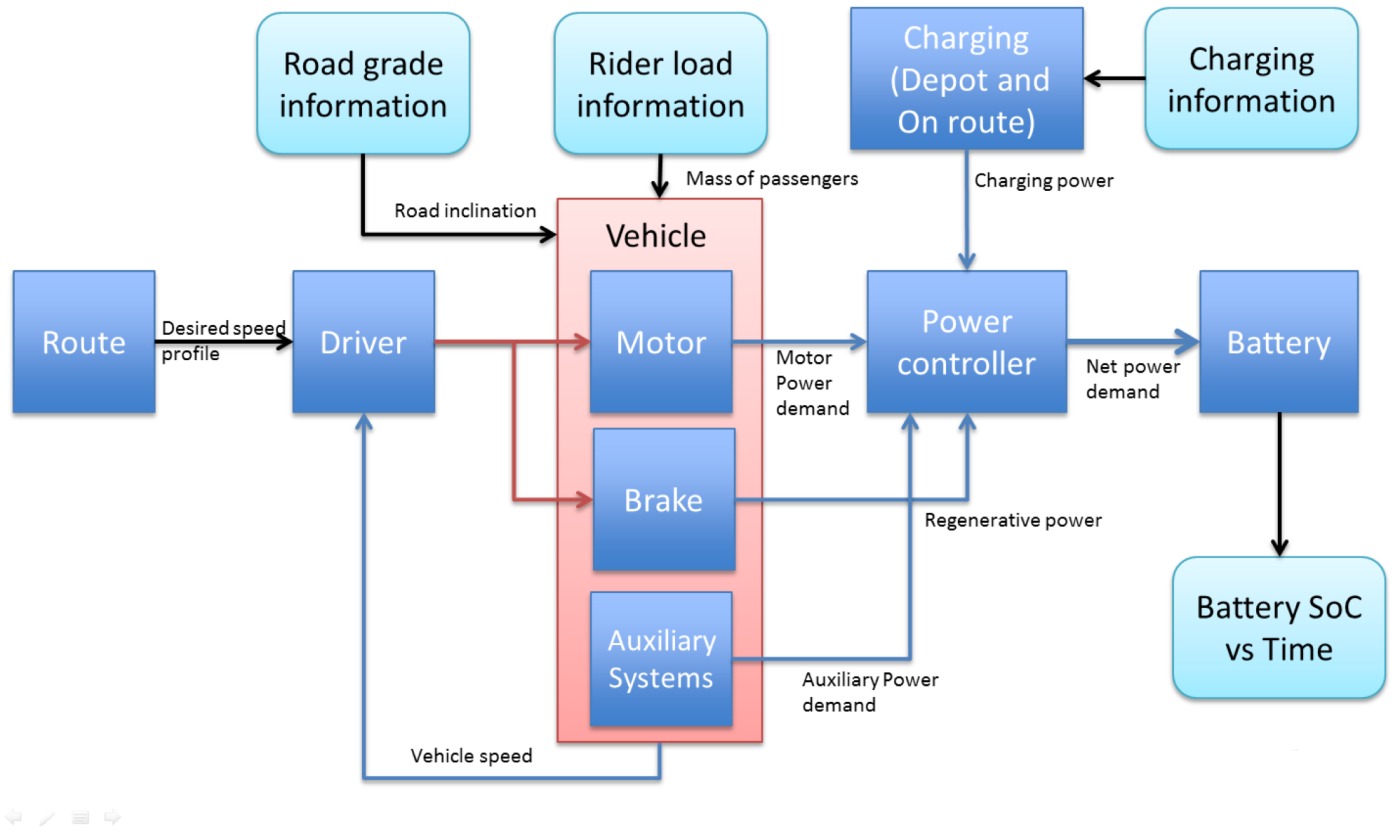 Figure 1: The model structure includes input from a variety of sources, and captures the dynamics of a range of components in a typical electric bus transit environment.

With the battery-electric bus model fully developed, the NRC and Maplesoft then worked together to create additional tools that would allow for easy import of a variety of transit routes, as well as tools that could be used to quickly gain insight into the performance of different routes and bus ...

With the battery-electric bus model fully developed, the NRC and Maplesoft then worked together to create additional tools that would allow for easy import of a variety of transit routes, as well as tools that could be used to quickly gain insight into the performance of different routes and bus configurations. The precision of the produced results from these analyses were far superior to techniques employed elsewhere, which would typically only include performance calculations based on average bus speeds and average energy consumption along a certain distance. MapleSim, the advanced system-level modeling software from Maplesoft, creates system-level models in a symbolic, parameterized environment, so adjustments could be made to easily modify the bus, or specific parameters could be optimized for a required performance characteristic. Tyson McWha, the Program Technical Leader at the NRC leading the fleet optimization team, clarifies how the bus model provided flexibility for their evaluation processes: “The primary advantage of using an advanced simulation platform to evaluate battery-electric bus implementation is that we can now adjust specific vehicle or infrastructure parameters and very quickly understand their effects on the entire system.”

By using a model-driven approach, the NRC now has the ability to take a given transit route and electric bus, and have their simulation and analysis tools automatically generate the key information required by transit operators and other decision makers. They are able to determine a specific understanding of the vehicle’s energy storage requirements for particular bus routes, helping to select the correct mix of technologies to meet the specific demands of the route.

The NRC is continuously refining their battery-electric bus model, increasing its capabilities by feeding in real-world performance data and other environmental variables like weather and traffic. The physics-based modeling platform in MapleSim gave them an intuitive tool that is being used effectively by their transit technology experts. Noting the opportunities to improve upon the bus model, McWha commented on the use of system-level modeling within the fleet optimization team: “Migrating our modeling towards the MapleSim platform has increased our researchers’ ability to bring their individual expertise to every facet of the vehicle and infrastructure models.  In the end, we have a more user-friendly tool that provides more flexibility and better accuracy.”

The NRC is continuing to research the ideal configuration of battery-electric buses in cities across Canada, and they are using modern design approaches to answer questions with greater accuracy than ever before, allowing transit authorities to make informed decisions. By taking a model-based approach to engineering design, the NRC is helping to bring Canadians zero-emission public transportation that caters to the needs of each individual community.

Contact Maplesoft to learn how MapleSim can help with your projects